The circus was already a popular phenomenon throughout England when it finally arrived in America. Between 1800 and 1820, the Circus of Pepin and Breschard toured down the East Coast of the United States, from Montreal, Canada to Havana, Cuba. This offered Americans a flavor of the circus, and prompted widespread interest in such performances. Victor Pepin of New York was the first person in the country to build a successful circus. This circus bore all the same resemblances as those put on in England, including impressive stunt actors and towering “Big Tops,” containing hundreds of eager spectators.

After the strong reception of Pepin’s work, Joshuah Purdy Brown stepped onto the scene with Purdy, Welch, & Company. Brown purchased a small elephant that he showcased around parts of upstate New York, receiving large and enthusiastic crowds. He soon began adding other exotic animals to his lineup. He took it a step further when he started training them in various circus performances. In 1835, a group of 135 farmers united to form the Zoological Institute, founding the country’s first circus industry. This approach was a radical shift from how circuses were performed in Europe – most were owned by small families. In America, it was destined to become a thriving industry. 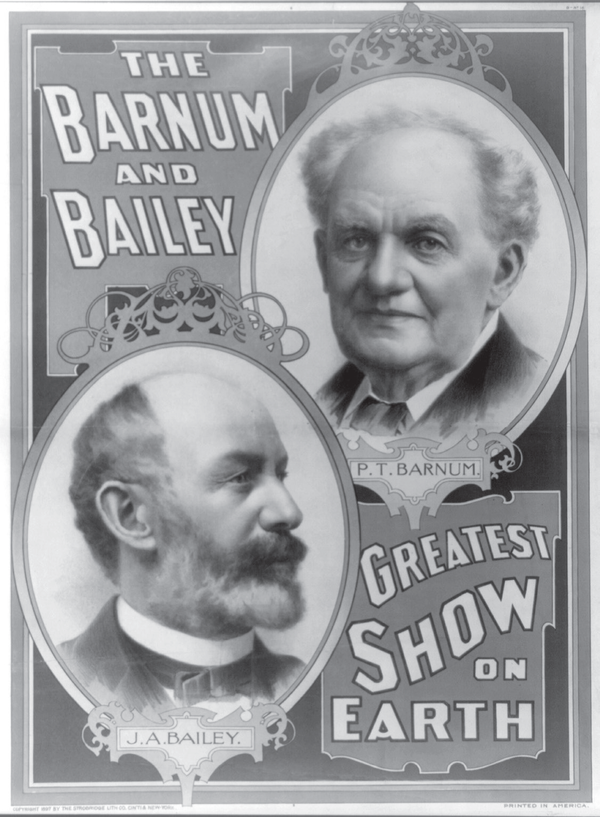 P.T. Barnum and J.A. Bailey. Reprinted from Lost Circuses of Ohio by Conrade C. Hinds, courtesy of the Library of Congress (pg. 22, The History Press, 2019).

Together, Barnum, Coup, and Castello revolutionized the circus in America. Barnum introduced freak shows to the American public. Coup founded the first multi-ring circus, and was the first person to use trains to move circus members between performance locations. For a decade, Barnum toured the entirety of the United States, bringing his circus performances and freak shows to people in countless major cities. For years, Barnum dreamed of touring his circus abroad. It was a goal he worked toward until his death in 1891.

After Barnum’s death, his circus merged with that of ringmaster James Anthony Bailey. With this merger came the opportunity to travel abroad. From 1897 to 1902, Barnum & Bailey’s Greatest Show on Earth toured Europe. The troupe’s use of trains for transportation and big top tents left an impression on European circus owners. American circus owners had combined traditional circus acts with animals and the additional freak shows to build a multi-faceted, multi-dimensional performance. European circuses followed suit and by the turn of the century, most circuses worldwide supported these features.

In 1919, Barnum & Bailey’s Greatest Show on Earth was bought by the Ringling Bros. Circus. By the mid-1900s, big top tents were virtually gone. Instead, circus performances were held in permanent venues like concert halls and sports stadiums. In 1967, Ringling Bros. was purchased by Irvin Feld, and was incorporated into the larger company of Feld Entertainment. When Irvin died in 1984, his son Kenneth took over the operation.

In the latter years of the 20th century, this version of the circus saw a dramatic drop in attendance. Due to protests regarding animal rights and increasing costs, the Ringling Brothers had their last performance in 2017, before permanently closing their doors. 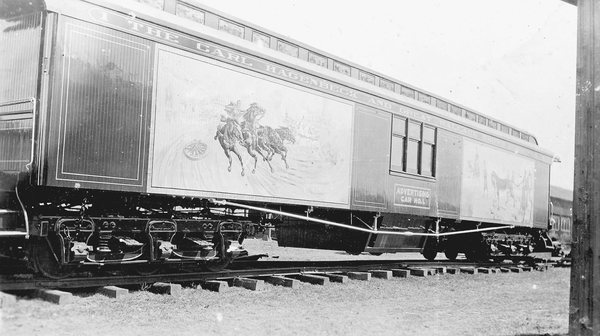 One of the Ringling Brothers train cars. Reprinted from Peru: Circus Capital of the World by Kreig A. Adkins (pg. 74, Arcadia Publishing, 2009).

While this more traditional approach to the circus has long since passed, in the recent few decades a new version has arrived. As technology improved, circuses were able to pull off more risky stunts. As arenas got bigger, speech became a less prominent role and instead costume, lights, and sound were used to build a story. The largest of these new circuses is Cirque du Soliel, which launched in Canada in 1990, but relocated to Las Vegas in 1993.

The Circus in the Modern Day

Today, most circuses take place on a stage, and have the added benefits of modern day’s technologies in lighting, infrastructure, and design. The overall aesthetic of the circus is focused on costumes, original music, and lighting to relate a narrative or thematic concept to the audience. Animals are no longer used due to laws forbidding their role in entertainment performances. Circuses today tend to take a more character-driven approach, telling stories through song, dance, lighting, and costumes.

This version of the circus gained popularity in the 1970s in Australia. It crossed the Pacific and quickly engrossed American circus goers. The Royal Lichtenstein Circus, self-proclaimed as the world’s smallest circus, was a troupe created in San Jose, California, who toured between 1971 and 1993. The Pickle Family Circus in San Francisco, California was founded in 1971. and played an influential role in reintroducing the art of the circus to spectators. They also impacted the creation of Cirque du Soleil that quickly became a worldwide event. Some of the most famous Cirque du Soleil performances include “O,” “Ka,” “Mystere,” “Love,” and “Zummanity”

Most will claim that the interweaving of classic circus traditions with new modern techniques invited a newfound interest in the circus among today’s audience. For Cirque de Soleil, this has meant enormous success, exceeding $810 million every year. Today, the troupe has over 19 shows in 271 cities on six continents.

Despite the evolution of the circus in the last two centuries, it remains an exciting and captivating experience for spectators. Cirque du Soliel performances are of the most popular attractions in Las Vegas, and garner massive crowds in cities around the globe. Improved technology has allowed circuses to reach for shocking new heights, forever capturing the imaginations of their audiences.

Circus Freaks From History That Will Shock You

You may have missed

History of Circuses in America